In late May, somewhere over Red Wing, about 45 miles south of Apple Valley, popped an over-inflated weather balloon carrying with it an informational payload that gave School of Environmental Studies (SES) students a unique look into life 20 miles into the stratosphere.

This experiment was part of the school’s seven-day intensive theme course, an option available each trimester that gives students an opportunity to immerse themselves in a topic and earn an elective credit. Physics teacher Eric Colchin and students in the scientific inquiry course collaborated with Dr. James Flaten, a University of Minnesota professor in the Department of Aerospace Engineering and Mechanics, to get the course off the ground.

Students were tasked with building the sensor package that would be key to collecting important data during the flight. The package included a camera and the camera’s power system, all which needed to be protected from the inhospitable stratosphere. Students then built the balloon’s payload with Styrofoam boxes, inserted all of the sensors and the camera, and held it together using zip ties.

“They checked that all the batteries were charged and the memory cards were ready to collect the data they needed,” Colchin said. “At the end of the day Dr. Flaten came to answer questions and look over their designs.”

The sensors added to the two payload boxes were able to collect data on changes in pressure, temperature, light, radiation, and there were also cameras to collect video of the flight. With the go-flight orders given, Dr. Flaten took the payload and handed them off to his launch team. The class watched the launch live via Zoom as the balloon set off from Elmore, a city in south-central Minnesota right at the Iowa border. A little over two hours later, the balloon popped and landed in Red Wing, reaching a maximum height of 99,107 feet into the stratosphere.

“I love working on a project like this because the students decide what they want to learn about the atmosphere, and they decide what kind of information needs to be collected to get the answers they want,” Colchin said. “In this case, it is hard to imagine that only 20 miles up is that difficult to get to. When they realize the scale, it seemed to give the students an appreciation for the air that they are surrounded by.”

Colchin retrieved the payload, which landed high in a tree. Over Zoom, students eagerly reviewed the data with Dr. Flaten. Colchin said students had in-depth conversations about their interpretation of the data and examined the video to see how the design of the payload helped it land safely.

“It seemed that many of them wanted to launch another balloon right away,” Colchin said. “This platform provided a great opportunity for students to use real science and engineering practices.”

On the last day of intensive theme course, students presented their data and conclusions to Dr. Flaten and his team, as well as their peers in other intensive theme courses. Dr. Flaten, who also works with NASA as an associate director of the Minnesota Space Grant Consortium, regularly works with students on how to engineer effective payloads and launch weather balloons.

“They got to learn about the importance of understanding the limitations of measuring equipment and how to work as a team,” Colchin said. “This activity allowed students to get a personal look at the air they live in and practice building instruments to answer questions that they have. We all walked away with a new perspective of our planet.” 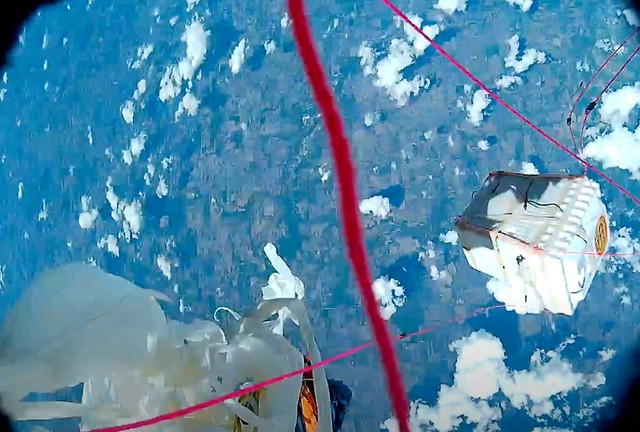